Youthstream president Giuseppe Luongo has long been on a schedule to make the MXGP series as big as it can possibly be. Making major changes and driving the sport forward, even in tough times while many National championships find the going tough the MXGP series has grown, with more fans around the world.

We caught up with Luongo at the GP of Belgium and asked him about the future of MXGP and the possible additions to the 2016 calendar.

Mxlarge: Giuseppe, there were some complained about some of the circuits this year. Can you explain to me about the changed in track preparation?

Luongo: Concerning the tracks, we see some problems, especially in Europe, because the organizations outside Europe follow the guidelines of Youthstream, but some of the old school circuits don’t rip the track like we request, or they don’t water like we request. The first thing for us is the safety of the rider and the second thing is the show.

Mxlarge: How will you be able to control this in the future?

Luongo: As I mentioned, we were struggling a bit with some tracks, because if the riders don’t like the circuit, then the show is also not as good. We take the decision to be very tough in this in 2016, because when the track is not well prepared at some venues this year. For instance in Germany and in Sweden, they didn’t do as we ask in track preparation, I think they will react, because our program will now be tougher than before. We have a good system, the organizer manual tells them what they need to do for preparation. From Tuesday when our staff are at the track, we need all the machinery and all the work has to be done. We finish the jump and rip the track, and also do watering. Saturday is an important day because the track is very busy, so when the racing finishes at the end of Saturday the biggest part of the circuit needs to be ripped again and the jumps need to be fixed and again the water has to be done after this work is done. For this it is easy to understand and every Saturday the Youthstream team and the organizers team have to work until 1am on Sunday morning or later.

Mxlarge: In saying that we have seen some pretty nice circuits in 2015, really well prepared and great racing?

Luongo: For the majority of circuits they do a good job and we don’t have a major problem. I think some of the old style circuits now understand and if they do not follow our guidelines for the circuits, then they will not run a Grand Prix again, and I am very clear on this. I will not permit that these few destroy the job of most of them.

Mxlarge: And what about 2016 and 2017? I see Australia wants to go again, and also you have many overseas venues interested.

Luongo: Australia will be in 2017, I think we still have a month work on that and I will know in the middle of September what the plan is there. We have on the calendar at the moment a big list of organizers, some unfortunately needed to be taken out. At the moment we have 19 GPs for 2016, but we might end up with 18 as I want to go step by step in building the calendar. For 2016 we talk to Malaysia, Thailand, Iran and Brazil and we have very good relationships with all these countries, we might have four of these or we might have two of them that will depend on these negotiations. Of course that also depends on how many European rounds we have. If we want to go to 18 we see the overseas and then adjust, we have a lot of requests from organizers, so it could be possible that we have 19 rounds.

Mxlarge: What about facilities? Some GP’s the paddock hardly fits into the facility and at times parking is difficult for spectators. I understand we need old school circuits to keep the heritage of the sport, but with the sport growing and teams being more professional, do we need to look at expanding the events?

Luongo: We also need to work on the infrastructure, like better parking, better facilities, more like in Assen. In South Africa the GP will be in a stadium, and also we are looking at a big stadium in Germany, an indoor stadium. We need to see the situation how to manage the track. We are looking at many things. Everything is growing fast with MXGP, and we need to grow with the sport. The teams have such a big effort, very professional and some of the circuits are too old for the trucks and spectators. We need some old school circuits, but we also need to bring the sport to bigger venues. In South Africa the race will be in a stadium that is outdoors. It will be very compact and a huge grandstand on one end of the circuit. They already do some auto-racing at the facility, and it will be very impressive.

Mxlarge: Italy has had three this year, obviously due to the increased interest in that country with Antonio (Cairoli). Are there more countries that will have double GP’s in 2016?

Luongo: I think The Netherlands we could have more, we have to see how Assen will be, but I think this will be a huge success and we also have Valkenswaard, so it would be a pity to take away one of these. Maybe Italy because business in Italy works well, thanks to Antonio, but also thanks to the industry in Italy. We have a lot of spectators in Arco and also Maggiora. Maybe Italy and The Netherlands is the only two countries where we would have more than two GP’s in the same country, we just don’t have the space for more countries getting two GPs.

Mxlarge: It is funny, because 2015 was going to be a huge season and it has been really exciting, with a lot of drama, but in my opinion 2016 will be even stronger with some really good MX2 riders moving up to the MXGP class. Guillod, Tixier and possibly Herlings would make that class interesting.

Luongo: Look, first I have to say 2015 is a crazy year, the coming of Ryan Villopoto, so many changes in the MXGP and MX2 points’ race, and also the year Youthstream and the GP’s grow unbelievable. We are now only second to MotoGP in popularity, and we have so many new followers on Youtube and facebook and all our other social media pages. From the sport side it is just the beginning of our plan we started eight or nine years ago. When we started the European championship with the GP we had some people being very critical, also with the age rule some people complained. What has happened now after a six years the level of the riders is growing a lot, and why is this? The track is very demanding, rough circuits, the younger riders also come and push the older riders out, these young kids respect nobody, they just want to win and are exciting to watch, and many riders from the European championship are finding good rides in MX2 teams. The level of competition in the European championship is so good at the moment, so many exciting races and at a high level, big fields. Also in MX2 and MXGP, the level is probably higher than it has ever been in my opinion. Look at riders like Febvre and Coldenhoff already this year, and next year we have more, like Guillod, Tixier and maybe Herlings, can you imagine how incredible the racing will be in 2016. We have a championship for everybody.

Mxlarge: What would you like to see changed in the near future?

Luongo: On the sport side it’s good, but we need to concentrate on one thing, that is linked to another. The riders are fast and professional, and we want to take care at the preparation of the circuit, for sure the hard pack tracks. They have to be 100% professional, but we also need to talk about the speed of the bikes. The riders are going faster and faster. The tracks have to be technical, safe and not too fast. We don’t want a supercross track in motocross, nobody wants this, but we need to slow the circuits down. We need to find a compromise on the bikes and the tracks. We have more variety in 2016, we will use more people using the track. Greg Atkins will help some tracks, also Freddy Verheerstraaten will do some tracks, and also Justin Barclay will do some tracks. Also a guy in Italy will help us. We want more diversity and more ideas from track designers. I talked to Clement Desalle, in Lommel, I have talked to Antonio Cairoli, and Jeffrey Herlings. We don’t want a track that suits just one rider, we want tracks for everyone. It is very important to make the circuits even more demanding for the riders.

Menos Más
5 años 10 meses antes - 5 años 10 meses antes #266680 por gelis
Respuesta de gelis sobre el tema MXGP 2015
"I thought about it until I seen Villo’s [Ryan Villopoto], just how everything worked out in that aspect. Not to mention, not to disrespect the MXGP guys, but those tracks over there just look terrible. There’s been a lot of races where it looked good, but then there’s a lot of races where I don’t even really think it’s really racing. It looks really hard-pack. It doesn’t look like a racetrack in my eyes. I think over here in America the competition is higher, tougher. So I won’t ever probably do that in my lifetime."

gelis escribió: "I thought about it until I seen Villo’s [Ryan Villopoto], just how everything worked out in that aspect. Not to mention, not to disrespect the MXGP guys, but those tracks over there just look terrible. There’s been a lot of races where it looked good, but then there’s a lot of races where I don’t even really think it’s really racing. It looks really hard-pack. It doesn’t look like a racetrack in my eyes. I think over here in America the competition is higher, tougher. So I won’t ever probably do that in my lifetime." 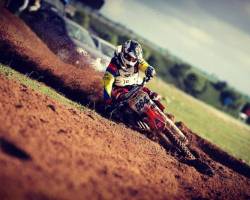 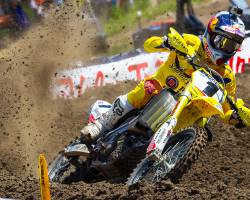 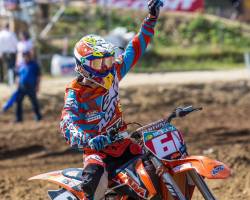 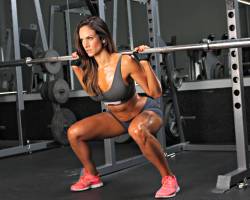 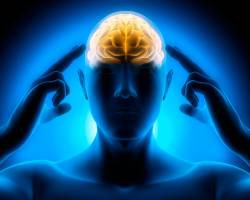